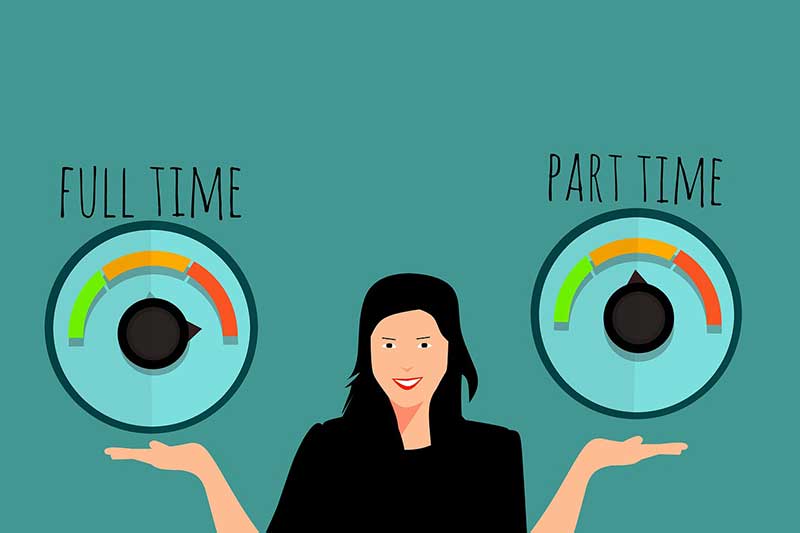 If you click a link on this page then make a purchase, I may get a commission. Thanks for your support.

There are many different ways to make money online, whether it’s just a side hustle or a full-time income and beyond. If you made it to this article then you’re at least vaguely aware that you can make some amount of money as a blogger, but can blogging be a full-time job?

Well that’s what I’m going to answer for you in this article, and since I am a blogger I think I’m qualified to do just that.

Can blogging be a full-time job?

I won’t drag this out or make you wait for a clear answer to this question. The answer is a resounding yes, you can absolutely be a full-time blogger and make a good living doing it. However it’s a long road to get there and it’s not easy to build the business. In fact, most give up long before you reach profitability.

Some make it though, I was one of the persistent ones that never gave up and refused to quit. Now I’m making a full time income as a blogger.

I actually quit my day job last week. My blogging business is doing so well that it just made sense to. It’s something I’d been planning for quite sometime anyway, after the nice month I had in December, I just decided to go for it.

I’m really looking forward to seeing just how much I can grow the business and scale things now that I can put all of my energy into.

There are many different ways that bloggers generate revenue. Some of the more common ones are:

Personally, I use the first 2 methods and that’s how I generate my revenue. Once you’ve figured it out, it’s simply a matter of scaling it up with additional content and promotion. What a full-time income actually looks like is going to vary from person to person.

The sky’s really the limit. There are the beginners who are struggling to get started and might be making anywhere from a few dollars to a few hundred.

There are also the one-man (or woman) shows and very small teams that are easily making 5-6 figures/month, and there are blog portfolios so big that they’ve become publishing giants and are likely making millions of dollars/month using the above monetization methods.

And there’s everything in between.

How long does it take for a blog to make money?

There is really no correct answer to this question. I can however give you some examples from my personal experiense.

It took my first niche website about a year to start consistently making $300/month.

With another site it took about a year to be making $1k/month.

Yet another website of mine took a year to start making $1500/month.

I’ve also had sites that I didn’t put enough effort into that never made any money.

So again, there is no set amount of time. It depends on you and your consistently and efforts as well as the niche you chose and topics you’re writing about.

Now I like to be making around $1k/month from a new blog at a year old, if I’ve put in a lot of effort in the first year.

If you’re new to blogging, expect less… though you could get lucky.

Is it hard to make money from a blog?

It’s not easy. It takes real work. Just because blogging for a living may sound easy, doesn’t make it true. Now if you are just trying to get to proof of concept and make a few bucks, then you can probably put in less hours.

However, it’s going to take several months for your blog posts to rank in Google regardless so you’ll be waiting the same amount of time for those initial dollars to roll in.

Being a successful blogger is harder than most people think.

Should I have multiple blogs?

This is a somewhat controversial topic, at least for newer bloggers. If you’ve already built one successful income-generating blog, then I think it’s pretty agreed upon that you should diversify. Two income generating sites is better than one.

However if you still haven’t really gotten anywhere with that first one, should you build another one?

I’m all for having multiple blogs, I think it’s smart.

Having said that, right when you first start you need to focus on the first one and getting it to success. If you think you can give enough attention to multiple sites so that they each keep growing then by all means.

The only thing is though, what if you are making tons of mistakes with that first site because you actually have no clue what you’re doing? How would you know, you aren’t even getting traffic yet…

So you start a new site and keep making those some mistakes on the new site. Mistakes like choosing terribly competitive keywords that you’ll never rank for in a million years.

On Niche Informer I talk about about blogging and making money online through SEO content.

The main topics include building and growing niche websites, things like SEO and keyword research, and how to make passive income with display ads and affiliate marketing.

If and when I decide to start a newsletter, here’s where you can sign up. Be sure to check your inbox and confirm.